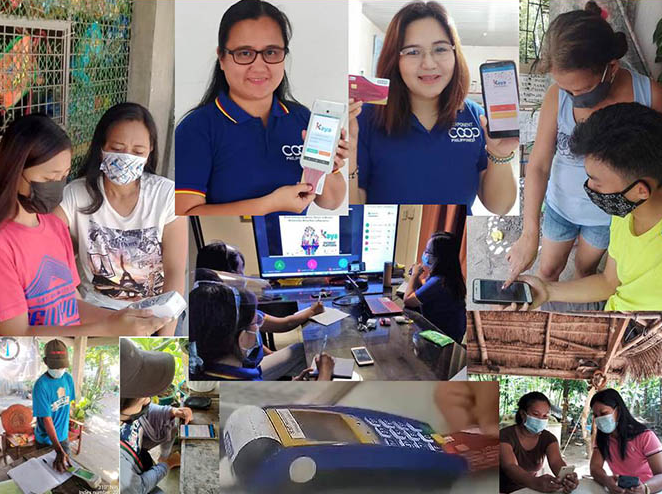 CAUAYAN CITY – Who would ever think that an obscure barangay would experience cashless transactions in sari-sari stores, carinderias, and the talipapa? Barangay Nungnungan Dos is proving to be the epicenter of digitalization in this city as Exponent Credit Cooperative (ECC) leads the way, powered by KAYA Payment Platform. ECC currently uses KAYA ATM, KAYA POS, and KAYA Mobile.

ECC is a very young co-op: established in 2019 and serving 150 members.  ECC had to mature and learn fast.

As General Manager, Sherryl Mauricio relates: “We started using the manual passbook, however, it proved inefficient as the volume of transactions increased rapidly.”

The co-op then used Google Forms and Sheets to produce digital statements.  “But our transaction volume was going up even if our membership did not.  The volume of transactions increased rapidly and we could not cope.”

In 2020, at the height of the pandemic, ECC Management determined that they “wanted to go digital.”

Initially, they considered a popular mobile transaction platform.  But the turning point came when: “We saw an online advertisement on an upcoming Co-op Digitalization Forum for August 4, 2020.

From the discussions in the Forum they learned about KAYA Payment Platform offered by the Philippine Federation of Credit Cooperatives (PFCCO) and NATCCO.  KAYA enables transactions through four channels: ATM, Mobile, POS and over-the-counter.

Yet they feared that KAYA was “amazing, but risky, expensive and probably difficult to implement.”

“Our timeline for digitalization was 3 to 5 years and because of the pandemic, all co-op staff were working from home.  The future really was to go digital!” says Maurcio.

Questions arose: Can Exponent Credit Cooperative recoup the subscription fee?  Can the co-op keep up the replenishment fund?

Mauricio recalls: “In January we didn’t have the money on hand so we discussed with members and tried to foresee problems we might meet along the way.  We assessed benefits outweigh the risks.”

And just in the first few weeks, KAYA proved to be Exponent’s “future-proof solution”!

“Management  can sleep better!   So thanks to Kaya!” she adds.

Expansion now seems limitless as KAYA ensures members can transact and thrive under any circumstance.

“It was really easy.  No difficulties! The POS, mobile banking and ATM implementation began with a 3-day training with the KAYA Team.  After that, they did not hear anything from us.”

Mauricio boasts that some of the co-op staff in charge of the system are ‘only high school graduates’: “The user interface was very simple and very easy to follow.  Just point and click!  We were so happy with KAYA and so we availed of POS channel in June 2021. With POS, less than one day was all we needed to start online implementation.”

“Due to the pandemic, we met only with 8 people at a time and showed them the Youtube tutorials of KAYA.  Our approach was member-teach-member and the rest is history.  Kaya has become a way of life!”

Members were initially surprised that loan releasing and payments are done online by using KAYA.  Members may apply for the loan and wait for the loan amount to be credited to their KAYA account.  Payments is thru KAYA fund transfer to a designated account.

“We just monitor the progress of the transactions on our computer.  We can see who paid and who has not, so we can make quick action.  Data is readily available!” says Mauricio.

And with POS, no more long lines!

With their ATM cards, members can just swipe it to make transactions.

The opening of ECC’s KAYA ATM as well opened new doors for the community.

Many people in the community did not even know how to use an ATM.  At first, some members could not believe that the ECC was going to have its own ATM and that the members will – for the first time in their lives – actually get to use one!

Senior citizen members and 4Ps beneficiaries use POS to withdraw their SSS pension and benefits.

Some members are under the Sikat Saka Credit Worthiness Program of Land Bank.  To withdraw their benefits, they would have to commute to the nearest Land Bank branch in the next town.  So what they used to do was give their ATM cards (and the PIN) to a trusted person who would travel to the next town where the ATM was located.  Said person would withdraw their cash for them and then bring it back.

Carrying a large amount of cash placed that person’s safety at risk to robbery or worse.  But it was the cheapest way because commuting cost Php 140.  So they never got to actually use an ATM themselves.

But with KAYA, it’s a new experience doing cashless transactions at the sari-sari stores and palengke.  POS used to be only in big malls.

“We have experienced cashless transactions!” she says.

But she resurrected her store and now operates a carinderia.

She now orders her merchandise from a supplier with KAYA. When she goes to the grocery, she uses her KAYA ATM for POS!  She no longer needs to withdraw cash from the ATM, but can perform cashless transactions.

All the customers in her canteen are account-holders of KAYA. They can transact on their own at anytime of the day.

Another ECC member Grace Diaz, was a canteen operator in the school.  She applied for a loan thru KAYA and opened a talipapa store in the nearby village.  She posts her merchandise in Facebook, and would deliver vegetables to fellow co-op members, and they  pay her thru KAYA.

Furthermore, she was surprised that she could withdraw from her KAYA account when she needed to!

Mrs. Lazaro’s entire family has active accounts and earn through KAYA mobile reloading!  They also make bills payments – so the members do not have to line up.  Even sari-sari stores have engaged in this, and they have more customers.

And one noticeable difference in the Barangay: We can now send or receive help thru KAYA fast and easy!  It’s not only once that a member has become positive for COVID-19, been hospitalized, needs to buy medicines, needs assistance.  And it takes just one text message to ask for help from friends, neighbors, relatives, and the co-op to receive help.  On the part of other members, they can easily send help to anyone with a KAYA account.

“It is amazing that ECC has made this kind of impact in our community.  This was never experienced before.  There were times when members needed help, they would go to the co-op, but it would be closed at night or during weekends, or sometimes staff would be in the field or attending a seminar. But thru KAYA the members can continue to transact by themselves!” Mauricio said.

City Mayor Bernard M. Dy recognizes ECC: “I hope that we are able to inspire with the humble experience of Cauayan City that smart cities are not only for highly urbanized or metropolitan cities. If (digitalization) can be done in a small, poor in terms of income, and highly agricultural city like Cauayan City, then there is no reason for other cities not to be able to do it!”

The City’s Communication Technology Officer, Atty. Reina M. Santos says: “Smarter city is the use of technology to enhance the delivery of social services with the aim to improve the quality of life of the people.”

“Our membership has obviously grown.   It was purely by word of mouth that we recruit members. And KAYA is the right tool to attract the millennials. They were born in the time that cellphones are the mobile technology that are integral to our lives,” Mauricio says.

“Brick and mortar banks are being threatened.  Banks feel threatened.  Who knows what will follow?  In a few years, it will be different. What we have now is a privilege to bring a different kind of passion, the passion of educating and connecting people in our communities,” she said.

“ECC on-boarded KAYA simply because we decided that we can!”

ECC is a member of the Philippine Federation of Credit Cooperatives (PFCCO).

NATCCO and PFCCO have partnered since 2016 to provide KAYA Payment Platform exclusively for co-ops, enabling their members to perform cashless transactions through four channels – ATM, Mobile, Over-the-Counter, and POS.